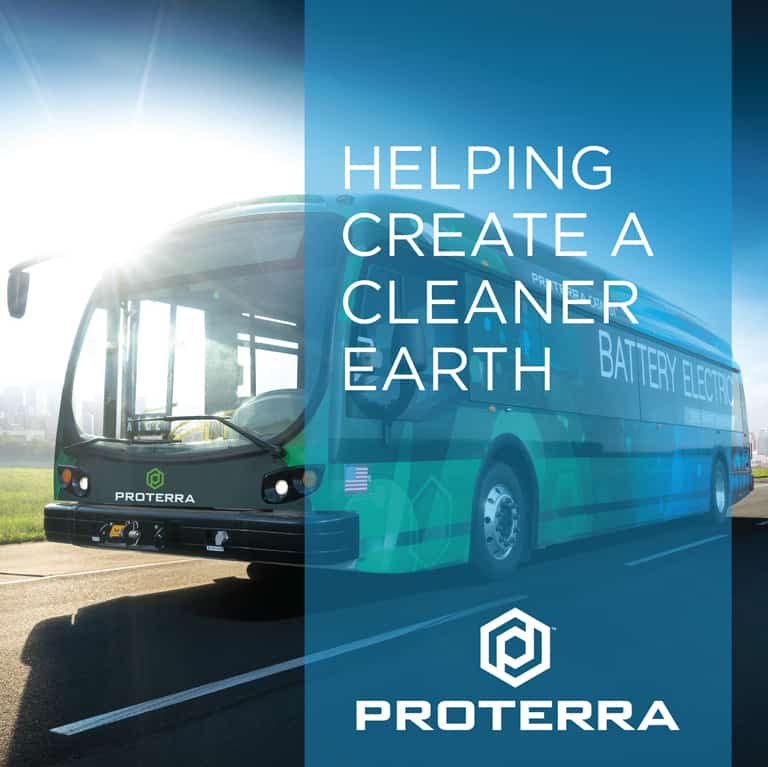 At Proterra, we’re very excited about Earth Day. This year’s campaign, set by the Earth Day Network, is about environmental and climate literacy. The idea is to empower people worldwide with knowledge about the threats of climate change, and with that knowledge, take action to protect the environment. Proterra fully supports this mission.

We are at a critical moment with regard to our world’s climate. The past few years have seen heat indexes across the globe reach record highs, significant increases in greenhouse gas levels in the atmosphere, and the melting of our polar ice shelves. These are just a few of the numerous indicators that climate change is not only real, but will have an increasingly dangerous impact worldwide. The preservation of our environment needs our support of fact-based science and collective determination to take meaningful steps to put our societies on a more sustainable path.

Electric buses reduce CO2 and harmful particulate matter. They can play a significant role in mitigating the threat of climate change by eliminating the dirtiest, least efficient vehicles on the road. Proterra’s vision is to enable clean, quiet transportation for all—developing vehicles that are not only cleaner than the fossil-fuel buses that we replace, but are better-performing and more cost-effective. As a technology company, fact-based science is our foundation. From how we build our buses—battery, drivetrain, body—to the benchmarks we strive for in fossil fuel reduction, all of our decisions are based on ongoing developments in technology, engineering and science.

When we read the latest studies, like ones from The American Lung Association, UNICEF, and the Union of Concerned Scientists, we know there is a growing global need for renewable energy sources and transportation that does not rely on fossil fuels. UNICEF reports that air pollution is linked directly to deadly diseases—one in eight deaths, globally, is due to air quality. That’s around seven million people, including millions of children. These are heartbreaking statistics, and even more so because we, as a global citizenry, have technology at our disposal to make cleaner, cost-effective choices for our environment and health.

Last year, Columbia University released a report that analyzed the impact that electric bus adoption would have on New York City. It’s worth looking at those numbers. Between NYC transit and the MTA, the combined fleet totals 5,700 buses for public transportation. The report states that a single fossil fuel bus emits about 84 million tons of greenhouse gases per year. Further, the analysis shows that electric buses would reduce emissions by approximately 575,000 metric tons of CO2e per year.

Of course, change doesn’t happen all at once. Even so, we should celebrate every move in the right direction, such as the University of Montana’s push to “go electric.” Each step toward fleet electrification is significant. In our previous blog about electric buses for universities and colleges, we highlighted that the university’s two new 40-foot Proterra Catalyst® buses will make an immediate impact on Missoula’s air quality, reducing tailpipe emissions by 1,392 tons during the vehicles’ 12-year lifespan.

As we think about this year’s Earth Day campaign to promote environmental and climate literacy, we imagine a future where engaged local communities take the lead in demanding sustainable transportation choices, improving the health of our transit systems, our communities, and our environment. Making this vision a reality will require close coordination from local institutions, regional and federal governments, utility companies, infrastructure builders, transit agencies and technology providers like Proterra.

Ryan Popple is president and CEO of Proterra, Inc.