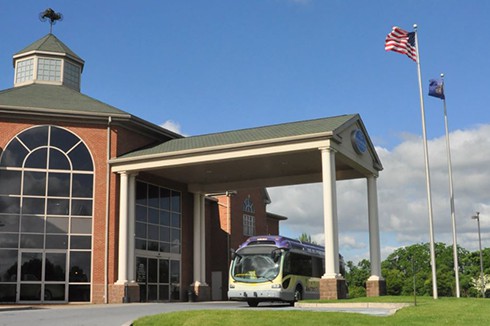 Recently, the Museum of Bus Transportation held its annual Spring Fling event in Hershey, Pennsylvania to recognize the impact the motorbus industry has on the everyday life of the American public and celebrate the advancement of the industry. More than 70 transit, coach, school and trolley buses were on display to showcase the evolution of transit technology over the years.

At this year’s event, Proterra, on behalf of the Federal Transit Administration, donated its first-ever zero-emission bus to the Museum, adding another chapter to the innovative history of transit. This bus accomplished many firsts for the industry and marked the beginning of Proterra’s journey to provide clean, quiet transportation to all.

“As fossil fuel engines continued to be energy inefficient and subjected to volatile fuel prices, the industry was exploring new technologies to power transit buses,” said Proterra founder Dale Hill. “I believed we were at a crossroads between fuel cell and battery-electric powered buses, and that battery-electric technology would be the most cost effective path forward for city transit buses. With help from the grant, Proterra designed the first full sized purpose-built electric bus that could be tested on public roads.”

The bus was debuted at the APTA Tri Annual show in San Diego in October 2008. During the show, the FTA had unveiled a white paper and hosted a session titled, “The Bus of 2030 – the Electric Bus,” which concluded that the future of electric buses was exciting but not yet a reality. Hill was in the audience and was ready to prove them wrong. He approached the FTA’s director of research and development, and said ‘how would you like to have your 2030 bus about 21 years earlier?’ Hill then unveiled Proterra #1 at the conference to a captivated audience.

The bus was then placed into its first transit service in Columbia, SC, in collaboration with the Central Midlands Regional Transit Authority and the University of South Carolina. The vehicle then went on tour across the United States and even participated in the Winter Olympics in Canada in 2010. There were also several trips made to Washington, D.C. where then Secretary of Transportation Ray LaHood visited the bus and became a champion of battery-electric bus technology. The pioneering bus completed its tour of duty at Capital Metro in Austin before retirement.

“Of the 100 or so demos our first bus did across the country, we only had one technical issue – an unheard-of accomplishment for new bus technology,” said Hill.

Following the successful deployment of Proterra #1 and the initial exploration with hydrogen fuel cell vehicles, Proterra learned that battery-electric technology was the most promising vehicle technology to focus on going forward. With the rapid advancement in battery technology, today’s buses are now able to operate for a full day of service on a single battery charge. Proterra continues to optimize the vehicle for best performance and safety, from the tires to the bus body to the battery systems, electric drivetrain and charging solutions, to meet the most demanding transit routes across the country.

The momentum of electric bus adoption has continued to grow around the world. Transit agencies and cities across North America have made commitments to pursue 100 percent zero-emission vehicle fleets. Today, with 8 million services miles on the road, Proterra has sold more than 700 vehicles to more than 90 communities in 41 U.S. states and Canadian provinces.

“None of this would have been possible without support from the FTA to explore new technology and our collaboration with the Center for Transportation and the Environment in managing the grant,” said Hill. “The development of battery electric vehicle technology has paved a new path for city transit buses that brings significant environmental and economic benefits to the community.”

Proterra #1 is now on display at the Museum of Bus Transportation in Hershey, PA.