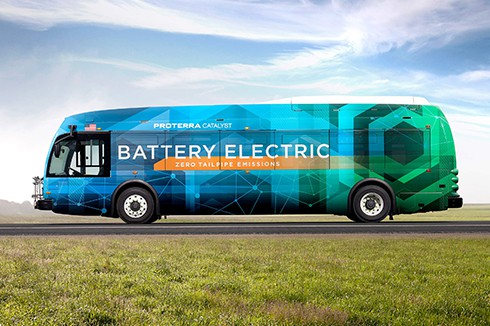 As transit agencies add electric vehicles to their bus fleets, one of the most important factors considered during the buying process is range. Understanding vehicle range is essential in determining how much battery capacity is needed, which routes the electric buses will drive on, and the type of charging infrastructure required. But range is not a simple static number, and the different ways it is reported can be confusing.

How is range calculated?  The formula to calculate range is based on two inputs:  (1) the amount of available energy in the batteries, and (2) the efficiency of the vehicle, which is the amount of energy consumed per mile.

The way range is reported and advertised can be broken down into two different measurement parameters that are important to consider: nominal range and operating range.

NOMINAL RANGE – AN EVEN PLAYING FIELD FOR COMPARISON

Nominal Range is calculated by taking the total nameplate energy within the batteries and dividing this number by the vehicle’s efficiency score, as reported by the Altoona Bus Research and Testing Center (Altoona).

During the Altoona tests, a dynamometer is used to run the bus on simulated courses that represent driving central business district, arterial, and commuter routes with varying steepness grades and maximum seated load passenger weight. A base model bus without modifications is used, operated by a driver trained in the best practices of driving an electric vehicle. An electronic fuel measuring system is used to indicate the amount of energy consumed during each phase of the test. As stated by Altoona, “The results of this test will not represent actual mileage but will provide data that can be used by recipients to compare buses tested by this procedure.” If we know the Altoona-reported efficiency of a vehicle as well as the total battery capacity, it’s easy to determine nominal range. This is a good data point to use as an equal playing field, when comparing the performance and efficiency of vehicle design across manufacturers.

Let’s take the Proterra Catalyst® E2 bus with the ProDrive drivetrain as an example. This vehicle has 440 kWh of total nameplate battery capacity on board and, based on Altoona test results, the Catalyst uses 1.75 kWh/mile (equivalent to approximately 21.5 MPG).  Following the formula above, the nominal range of this vehicle is 251 miles. 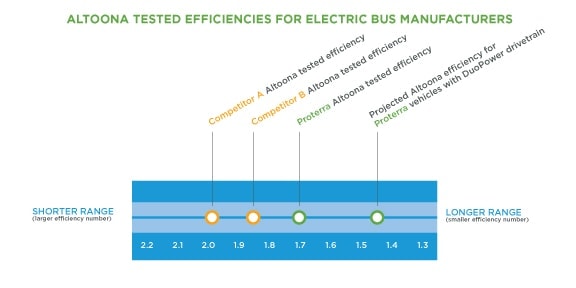 While nominal range helps compare apples-to-apples across vehicle OEM’s, it is not the best predictor of actual range in an operating environment.  Nominal range is based on the total amount of energy on board; however, the full nameplate amount of energy is never fully accessed during real-world operation. Each Proterra battery pack has a Battery Management System (BMS) that safely controls how much energy can be accessed during operation and limits this access to preserve the life and health of the battery. This battery health variable is not included in Altoona tests and differs across vehicle OEMs. By introducing this variable, the apples-to-apples range comparison across electric bus manufacturers becomes more difficult.

The accessible energy in a battery pack must be limited to provide a more consistent and predictable energy draw over its lifetime. If a battery is regularly discharged and charged to 100% of its total capacity, it will degrade faster over time, resulting in a faster-than-expected decline in range over the vehicle’s lifetime.  This applies across all battery-electric vehicle manufacturers.

The experienced team of EV engineers at Proterra has invested many years of research to find the sweet spot for heavy duty vehicle batteries.  To optimize battery health and vehicle performance over the lifetime of the bus, Proterra does not enable access to the all of the energy storage capacity at the beginning of the life of the battery. This reduces degradation and extends the life of the battery.

So what is the actual operating range?  Operating range takes this battery health factor into consideration and also accounts for weather (use of HVAC systems in extreme weather), varying terrain, driver behavior, frequency of stops, and any potential added weight of an agency’s specific vehicle configuration that may differ from the base model. These elements can have a significant impact on vehicle efficiency and resulting operating range when buses are out on the road in real service scenarios.

The best way to understand the impact of these factors is to review a real-world example. Foothill Transit was Proterra’s first customer in 2010, with three initial buses deployed.  Since then, they have placed several additional orders throughout the years, with 30 buses delivered so far. The average annual efficiency of their Proterra vehicles has been around 2.2 kWh/mile, and this number has varied based on the weather, driver, passenger load, traffic conditions, and route.

On February 20th, 2018, Foothill Transit drove a Proterra Catalyst E2 bus with the ProDrive drivetrain on a local route with a high number of stops, with HVAC running about thirty percent of the time. On this day, the bus achieved an efficiency of 1.9 kWh/mile and an operating range of 182 miles. But achieving this range would mean driving the bus 182 miles until it is completely out of charge and comes to a stop.  Since this is not a realistic scenario, Foothill has implemented a best practice of including a buffer of 20%. With this buffer in mind, Foothill can confidently meet the mileage requirements of their local routes. 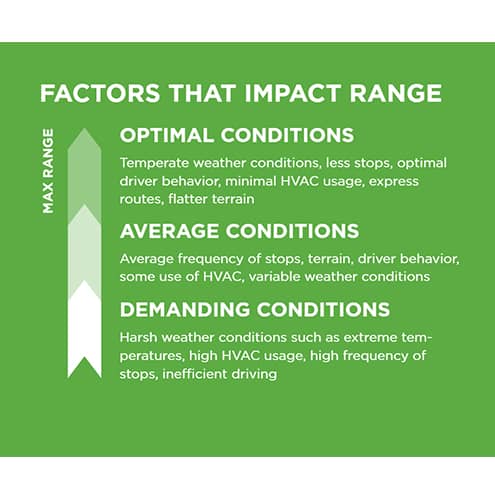 Foothill Transit saw even better results with the Proterra Catalyst E2 on their express commuter route, a 40-mile trip into downtown LA. On April 4th, 2018, a Catalyst E2 vehicle drove this route with a limited number of stops, and with HVAC running about fifteen percent of the time. In this instance, the bus achieved an efficiency of 1.5 kWh/mile, resulting in an operating range of 235 miles. “We have really experienced firsthand how much different factors, such as the frequency of stops on a route, can impact the vehicle efficiency and range,” said Roland Cordero, Director Maintenance and Vehicle Technology at Foothill Transit.

The data from Proterra’s simulations of routes across the continental U.S. shows us that with a Catalyst E2 vehicle, the majority of routes would achieve an operating efficiency of approximately 1.53 – 2.33 kWh/mile with ProDrive technology. This data can be visualized in the bell curve below, demonstrating how the operating efficiency of the vehicle can vary.  For example, if the driver accelerates rapidly and brakes harder and more frequently, instead of driving smoothly to take advantage of regenerative braking, or if the vehicle operates in challenging conditions such as extreme weather or variable terrain, then the efficiency is more likely to fall further to the right side of the bell curve. If the driver is using best practices for maximizing range and the bus is operating in more mild, temperate weather conditions with low use of HVAC, flatter terrain, and less stops, the efficiency will fall closer to the left side of the bell curve, resulting in greater range.

With Proterra’s recent introduction of the new high-performance DuoPower™ drivetrain technology, a Proterra Catalyst E2 vehicle with 440 kWh of battery capacity has an operating efficiency of approximately 1.28-2.08, extending the vehicle’s range to more than 275 miles. 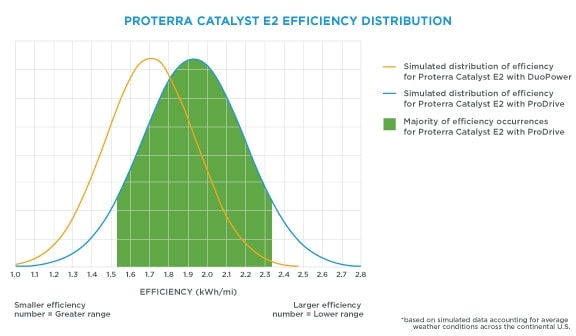 To make an informed decision when procuring battery electric transit vehicles, it’s important to understand the nominal and operating ranges for the vehicles under consideration, and the data behind those numbers. It’s especially important to know whether the OEM is limiting the usable capacity of their batteries to protect battery health and maximize range over the lifetime of the vehicle, because there is a lack of standardization around this practice. Proterra enables optimal battery performance over the vehicle’s lifetime by limiting the usable battery capacity in the initial years, in order to access this capacity later in the battery pack’s life and meet customer range expectations. This practice is not consistent across OEMs.

Proterra works closely with customers to determine the best vehicle and charging solutions, with a sophisticated route analysis that offers a predictable understanding of how a Proterra vehicle will perform on specific routes. With vehicles carrying up to 660 kWh of battery capacity, Proterra Catalyst buses have the flexibility to serve everything from local circulator routes to higher mileage routes. Customers can also demo a vehicle for a short period of time or lease vehicles for extended periods of time to test out routes and measure efficiency in real operating service environments. This allows customers to validate the operating range of their vehicles on specific routes.  It also helps determine whether an on-route charger might be needed during the day, or if vehicles can run all day and charge during the night at the depot. With this information on hand, the Proterra team will match the on-board energy storage to your total daily mileage and layover options and ensure the right vehicles and charging solutions are selected to meet customer requirements.

Knowledge is the antidote to range anxiety. With more information, range anxiety is transformed into range awareness. With range awareness, customers can go all-electric with confidence, to benefit the transit organization, community, and the environment that we all share.

Click here to see the operating efficiencies and ranges of Proterra Catalyst vehicles.