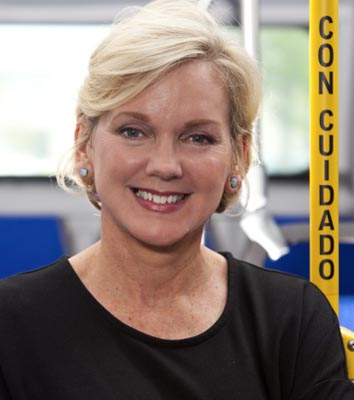 Jennifer Granholm became the first woman to be elected as governor of Michigan in 2002, and in 2006 she was re-elected with the largest number of votes ever cast for governor in the state. As a result of the meltdown in the auto industry and the global shift in manufacturing jobs, Michigan had the toughest economy in the nation and Granholm worked relentlessly to diversify it, adding new jobs and emerging sectors, such as clean energy, to Michigan’s economic portfolio. As a result of her leadership, Michigan led the country in the improvement of job market conditions between 2009 and 2010, according to the Gallup Job Creation Index.As governor, Granholm pioneered clean energy policies and worked with business and labor, Republicans and Democrats to create new economic opportunities and jobs in Michigan. She led an aggressive strategy to make Michigan the hub of clean-energy development in North America by developing entire supply chains in Michigan, fostering critical partnerships between industry, government and researchers and by creating economic incentives that made Michigan the place to locate. Granholm’s plan included specific clustering strategies targeted at battery manufacturing, bio-energy, solar, and wind power.Prior to her two terms as governor, Granholm was Michigan’s attorney general from 1998-2002. After leaving public office, Granholm joined the faculty at UC Berkeley, teaching courses in law and public policy, and was named a senior research fellow at the Berkeley Energy and Climate Institute. In that capacity, Granholm is chair of the American Jobs Project, a major research initiative focused on state-based policies to create advanced manufacturing jobs in clean energy. Granholm is a senior contributor to CNN, is the CEO of Granholm Mulhern Associates, and serves on several boards. She is also the co-author of the political bestseller, A Governor’s Story: The Fight for Jobs and America’s Economic Future and was a senior partner on jobs and energy policy during Hillary Clinton’s 2016 presidential campaign.