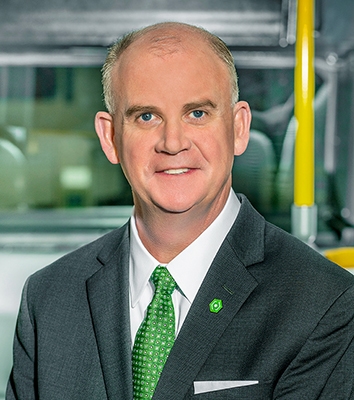 John Walsh serves as the Chief Commercial Officer at Proterra. Prior to joining Proterra, Walsh was President and Chief Operating Officer of Davey Coach Sales, Inc., one of the leading dealers of new and used mid-sized buses and shuttles in North America. Prior to that, he served as President of the REV Group, one of the largest bus manufacturing groups in the United States. Walsh was also Vice President of Sales and Marketing at ARBOC Specialty Vehicles and CEO of VPG Autos, maker of the MV-1, the first purpose-built wheelchair-accessible car. Before that, Walsh spent more than two decades at National Bus Sales & Leasing, Inc. and served as President, where he grew National from a small school bus dealership to the largest bus dealership at the time.